As I’ve mentioned before, I have never watched any of the Gundam series. Never. None of it.

Somehow I find myself wanting the model kits. Actually no, that isn’t true. I know exactly why I want the kits.

It combines two of my favorite things: punching hordes of dudes and giant robots. In this case, however, you’re punching hordes of robot dudes right in their robot faces. There were a lot of characters in the game that I didn’t care for, but Domon Kasshu and Master Asia, the Undefeated of the East stood out from the pack of angsty teenagers who don’t realize how awesome giant robots are. While the other characters are sadding it up with laser bazookas and plasma swords, Domon and Master Asia, the Undefeated of the East are running around punching as many faces as possible. It’s Gundam Wuxia.

That’s why today’s subject is Master Asia, the Undefeated of the East’s Master Gundam. It is a snap-together model kit that, quite honestly, is better made and more articulated than the majority of my action figures! I expect to be taking many more shots of this guy.

The backdrop is a square of vinyl floor tile I picked up at the hardware store and lit by reflecting a desk lamp off of the tile. In Photoshop, I painted the eyes and “DARKNESS FINGER”, going a little sloppy to make it appear the power was radiating out of the Gundam. 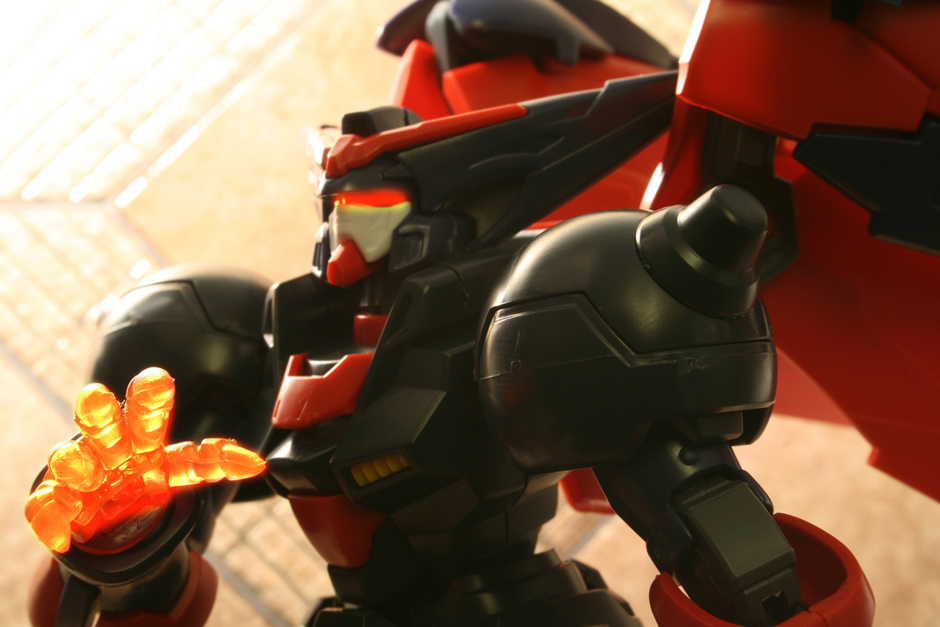 If there’s tomorrow,
Would you give me Please forgive me?