While I may not play Warhammer 40,000 anymore, Games Workshop has a special knack for producing models that I just want. Pretty much anything from the Tyranid and Necron lines are enough to make me angrily reach for my wallet, lamenting my choice in hobbies and putting another scorch mark on my credit card.

What originally attracted me to the Necrons are the obvious comparisons with the Terminator, along with the idea that, because they are so incredibly old, on any planet there might potentially be Necrons sleeping away the eons until something (or someone) dug too deeply and disturbed their tombs. Once that happened, it was lights out for everyone around. Their guns break matter down at a molecular level, the living metal making up their bodies can repair almost any damage, and their only goal is to, well, terminate everyone and everything. Once the task was done, they all moved together, totally silently, back to the tomb. Super creepy.

With the current (as of August 2014) codex, their story has evolved to where they are part of an ancient civilization based around multiple Dynasties competing for power, which… I am not a huge fan of, honestly. While it’s fun to see them expanded on and given a reason for being, it was the sense mystery and dread that initially drew me in. Thankfully the current codex has, tucked away in the story, an entry for something called the Empire of the Severed that fits in with what I was hoping for. Essentially, a tomb was damaged by radiation storms and had its memory banks erased. All that is left is the core AI who, unfortunately, has gone quite mad…

So with that in mind, I set about painting a box of Lychguard to fit the image in my mind. A tomb of amazingly advanced yet mindless machines, millions of years old, left to weather the ravages of time due to corrupted automated systems, and reactivated to answer the summons of a mad computer program that thinks itself an Emperor. 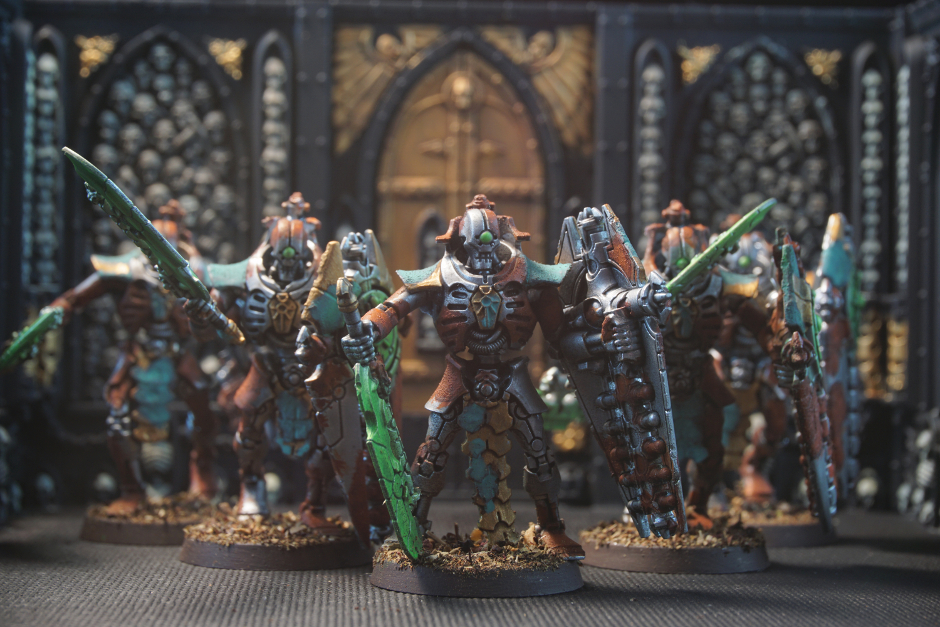 hand on my back